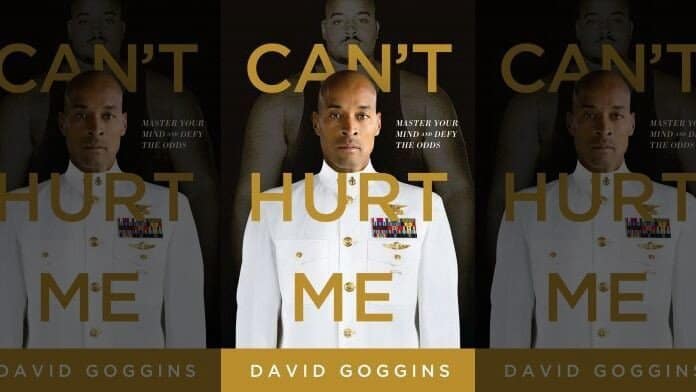 I now understand why former Navy Seal and ultra marathoner, David Goggins, earned the nicknames the “toughest man alive,” the “sultan of suffering,” a “connoisseur of pain,” and a “disciple of discipline.” Listening to the audiobook of his life story, Can’t Hurt Me, was like entering a blast furnace. After I had finished, I felt a bit like tempered steel—my convictions were transformed into something harder and more resilient. This book catalogs Goggins’s journey from an insecure, fearful child to the confident, proud man he is today. By recounting fragments of his broken childhood, he pieces together a mosaic of spectacular human achievement.

To give you a taste of just how impressive this guy is, here’s a sampling of his life-resume. He:

Notably, Goggins had always said that the endurance feats didn’t come easily. In 2010, when he was thirty five—after completing many of these feats—he found out why: It turns out that he has a congenital heart defect, involving a hole in his heart the size of a quarter.

The key to his extraordinary achievements is his ability to seek out ambitious, obstacle-laden goals and develop himself mentally and physically along the way. Both components are required. He couldn’t have cultivated the skills to do great things without stepping outside his comfort zone; he needed obstacles to overcome.

To overcome such seemingly insurmountable obstacles, Goggins uses various mental techniques to tap deep into his potential. He calls one of these the “forty-percent rule.” The rule is that when he feels like quitting, he tells himself that he’s only at 40 percent of his potential. He draws this estimate from a lifetime of experience. And by implementing this rule, he gains a significant psychological edge—an edge that enables him to achieve the extraordinary.

One example of this was when he wanted to run the Badwater 135 to raise money for the families of fallen soldiers. Again, this is a 135-mile race through California’s Death Valley, in the summer, with scorching hot days and freezing nights. Given that this would be his first race of more than one hundred miles, he needed to run a one-hundred mile qualifying race. The only remaining qualifying race before Badwater 135 was the San Diego One Day. Goggins had to run one hundred miles on a track within twenty four hours, but there was no time to prepare. The race was in three days.

Goggins would later confess that this was the hardest thing he had ever done because he was woefully unprepared. Weighing around 250 pounds, he was the largest person in the race by far. His plan of fueling himself throughout the race with protein shakes and Ritz crackers was a newbie mistake. At mile seventy, his body shut down. He took a seat. He couldn’t walk, control his bowels, or see straight. The bones in his aching feet were broken. He tried to walk the remaining thirty miles, but at mile eighty one he was told that, at this rate, he wouldn’t make the qualifying deadline.

So what did Goggins do?

He ran nineteen miles nonstop on broken feet to finish before the deadline.

As he details in the book, this experience was a turning point. He accessed a source of strength he didn’t realize he possessed. He later wrote that, at mile seventy, when he was suffering from severe physical and mental exhaustion, he was only 40 percent spent. He had another 60 percent left to give. Goggins finished the race with time to spare, and went on to run the Badwater 135.

It’s debatable whether this kind of extreme risk, bodily destruction, and pain is rationally defensible given the kinds of goals involved. But there is no question that Goggins’s story is a testament to the extraordinary feats a human being can achieve despite seemingly insurmountable obstacles. If there’s a “how-to” to learn from this book, it’s how to face challenges head-on and realize more of one’s potential.

I’d recommend the audiobook over the printed edition because, in the audiobook, the narrator pauses throughout to ask questions of Goggins, who provides more context for his anecdotes. I also want to caution the reader that Goggins uses profanity in large measure, and if you’re sensitive to this, you might want to get the profanity-free print version.

Someone suggested in a YouTube comment that Chuck Norris has a picture of Goggins on his wall. It wouldn’t surprise me.